All poker players know, tournaments are where the money is at. Ring games are OK too, but you truly have to be an exceptional player to eke out some long term wins there. The luck-induced variance is just too much, and battling all those schooling rookies gets way too frustrating.

When I say the money is in the tournaments though, I don’t mean those freerolls that have thousands of players competing. Those are just not worth you while. The odds that you face are overwhelming and the eventual rewards are too minute. The time that it takes for you to complete such a tourney is way too long, and frankly, there are a variety of ways to invest that same amount of time much more lucratively. 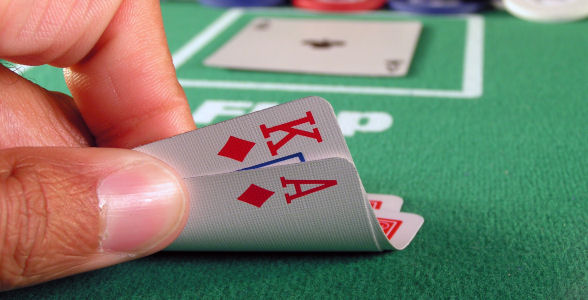 What you’re after, are real money MTTs or STTs. The fact that you pay real money to buy in to one of these tourneys is usually enough of a deterrent to keep those who aren’t serious about playing, away from the tables.

At the beginning of the tournament, you should play very tight. In tournaments, a lot of value comes from simply surviving from one hand to another. You do not want to play the “all in” game many payers like so much, so early in the tourney. Many of these guys do not really have a clue what they’re doing, so they will certainly commit chip suicide, sooner rather than later. I advise you not to bother them. Let them go bout their business, and focus on extremely strong hands. Then you can help them leave, but do not try too hard.

Some of these early “all-in” guys do what they do as part of a strategy. I’m not sure at all how effective that really is, so I will certainly not recommend you do it, but this is what some of them do: they go all in a few times and get lucky. Obviously, when someone calls your all-in and you win, your stack grows like it’s on steroids. Pretty soon, they’ll have a large-enough stack in front of them. That is when the second part of their “strategy” kicks in. They sit back and sit out the rest of the tournament. Obviously, these people have noticed that because of the variance specific for Texas Holdem, and because of the fact that so many lousy calls are made in every tournament, some players do worse then those who don’t even play at all. I have indeed seen players who sat out and made it to the top 3 of a STT. Whatever it is they’re after, one thing is sure about these wise-guys: they cannot play poker. The all-in part that they perform in the beginning is a bingo-like coin-flip game. That certainly says nothing abut their abilities as players. The second part doesn’t even say that much. It is obvious that they go through a lot of trouble to avoid having to play, so actual play must not be one of their strong points for sure.

On top of all that, they’re annoying. I was in this STT final four, (started out as a 10-person table) where one of the players was one such fella. Legal or not, we made a deal with the other two players to do our best to knock him out, as 3rd place would’ve already meant ITM. So we did. We knocked him out with a combined effort and went back to playing poker.

You may say it was collusion, but I don’t think it would’ve been fair to allow him to reach ITM.

Anyway, back to tournament strategy. As soon as you see all the “all-in” maniacs are gone and the game settles down, time for you to turn looser and a bit more aggressive too. You need to build up a respectable stack for the closing stages if you intend to actually win and not just barely reach the money.

In the closing stages of any tourney, you need to turn into a maniac. Remember that in short-handed and heads-up poker starting hand values plummet, and you’ll be posting blinds every single hand.

If you have the larger stack and you play well enough, there’s not much that can prevent you from winning.